Can you distinguish between inferences and assumptions? 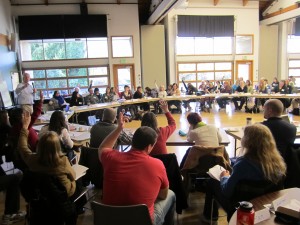 At Socratic Seminars International, we promote dialogue and NOT debate in our Socratic Seminars. When a Socratic Seminar is rich in dialogue, participants reveal assumptions for examination and reevaluation. My experience in introducing and practicing dialogue with students and adults has made me realize that many of us are not so sure what the relationship is between an  assumption and an inference. Richard Paul and Linda Elder of the Center for Critical Thinking are internationally recognized authorities on critical thinking and published a short article on this subject that is clear and illuminating. It is titled Distinguishing Between Inferences and Assumptions. Below I have summarized some key points for your consideration.

We hear the door slam and infer that someone has arrived.

We see a frowning face and infer that the person is upset.

If our friend is late, we infer that she is being inconsiderate.

We meet a tall guy and infer that he is good at basketball.

Often different people make different inferences because they bring to situations different viewpoints. They see the data differently. To put it another way, they make different assumptions about what they see.

This page was edited and adapted from the book, Critical Thinking: Tools for Taking Charge of Your Learning and Your Life, by Richard Paul and Linda Elder.

We at Socratic Seminars International believe thoughtfulness starts with looking closely at the assumptions and inferences made by ourselves and those around us, in and out of Socratic Seminars.